How the Sam the Record Man Sign Was Saved 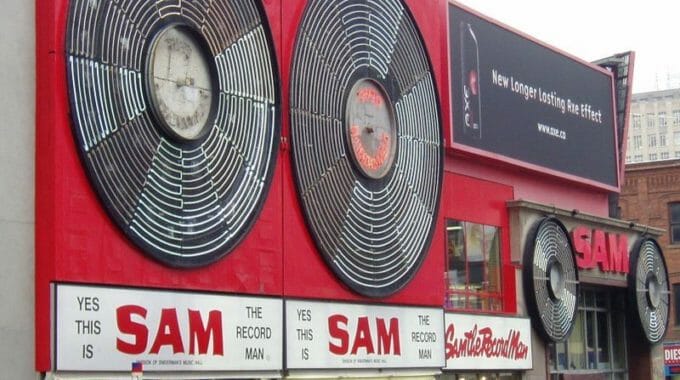 Signs not only represent company brands – sometimes they become iconic. This was the case with the giant ‘spinning’ records that for years adorned the rooftop at 347 Young Street in Toronto at the flagship store of Sam the Record Man. While the flagship store officially filed for bankruptcy 2017, thanks to Toronto’s City Council, the signs were given heritage designation, and they have since been restored and can now be enjoyed for many more generations to come.

The Origins of the Spinning Records

The original sign was first commissioned in 1971 when Sam Sindeman commissioned Jack Markle to add a new sign to the building’s façade. Markle’s partner, Jack Derraugh sketched a picture of a giant record that would use neon lights to give the illusion that it was spinning. Sindeman fell in love with the idea. To get funding for the project, he persuaded record companies to purchase advertising to place right in the centre of the sign.

At eight metres wide, the Sam sign was the largest neon sign of its kind in Toronto’s downtown core. When Sindeman expanded his store to include the adjacent building in 1987, he hired the company Claude Neon to manufacture and install a replica sign right next to the first.

As competition in the music industry increased and as downloadable music became ever more popular, Sam the Record Man was faced with dwindling sales. The company filed for bankruptcy in 2001 but managed to keep the doors of its flagship store open until 2007 before it too finally had to close.

Although the signs were given a heritage designation, there was still the question over the new ownership of the building and whether the new owner would agree to preserve the signs. That question was resolved when Ryerson University took over the site, planning to demolish the old building and erect a new mixed-use facility.

Sheldon Levy who was president of Ryerson at the time confirmed that he was committed to saving and displaying the signs on the campus.

Saving an eight-meter neon sign in this day in age is no small task – especially with Sindeman’s insistence that the spinning discs had to remain neon and not be replaced with more modern LEDs. The first step was removing them from the old building before demolition. They had to be carefully taken apart, and each part had to be tagged so the sign could be reassembled later – in all, this process took more than two weeks.

When Ryerson’s new building had finally been constructed, components of the sign had to be examined to see what could be reused and what had to be replaced. The letters spelling out the word SAM were usable but had to be repainted and rewired. A good portion of the neon tubing was still ok, but some had dulled and needed to be replaced. Since neon components are not widely used in signage anymore, some of the parts had to be sourced from the U.S.

Fortunately, The Brothers Markle are still in operation in Toronto and were able to provide new electronic flasher lights for the sign.  Ryerson had to work extensively with engineers in order to ensure that it would be safe to install the sign on their new building. Weight, wind load and snow loading all had to be taken into consideration.

To say that saving the iconic sign was a team effort would be an understatement – but thanks to everyone who was involved, the giant spinning discs are and will continue to be a Toronto landmark.

When it comes to business signs, we imagine there are many iconic signs you remember.  Contact About Signs in Oakville Ontario to build your next storefront sign, vehicle wrap, or custom awning for your business today!