If your company is going to participate in a trade show, you’ll want to set up an alluring booth so that you get the chance to meet plenty of people and let them know what your company does or what it sells. Printing technology has come a long way in allowing companies to slap their logo on all sorts of items – pins, keychains, post-it notes, travel mugs, you name it. But at a trade show, attendees are bombarded with branded knickknacks. As a result, your promotional items, and more importantly, your company name, can be easily forgotten. If you want to make the most of your presence at a trade show, consider bringing these items along.

Flash memory drives were once a novelty trade show giveaway, but now they’ve become commonplace. But just because they’re abundant, doesn’t mean they can’t be useful reminders of your company. The value of USB sticks lies in their practicality. They’re used routinely to transfer and back up data, and your logo will be seen every time they’re used.

Something that companies can overlook at trade shows is the fact that they can be physically draining on attendees. Shuffling from seminar to seminar, walking around exhibit areas, and standing for extended periods of time while listening to pitches can leave people worn out. Little refreshers like breath mints, lip balm, hand sanitizer, and band-aids can prove to be very valuable. Attendees will be grateful that someone had their immediate personal needs in mind.

The emphasis here is on quality. Free pens at a trade show is pretty much a given, but most of those pens are bargain basement writing tools that just so happen to have a company’s logo on them. Spending a bit more on really good pens ensures that they won’t be tossed at the end of the event.  If it feels good and writes well, attendees are more likely to keep them, use them, and remember who gave it to them.

Tote bags are solid giveaway items because they’re useful beyond the event, as they can be used for carrying groceries, bottles of wine, or anything else in need of toting. Plus, they’re valuable during the event. Attendees have something in which to carry all of their swag, and as they walk around the trade show, your tote bags turn into little moving billboards.

Often the best thing a company can bring to a trade show isn’t something that attendees can leave with – alluring booth signage. Small freebies are nice, but in a crowded room it’s your signage that stands out and garners attention. When creating the graphics for your banners and table signage, opt for bold but clear imagery. Intricate designs can distract from the message you want your company to portray. Make sure that your company’s name is prominently displayed, alongside a simple and memorable tagline. You want to clearly communicate what your company does or sells in as few words as possible. Take a look at a few of our trade show sign displays. 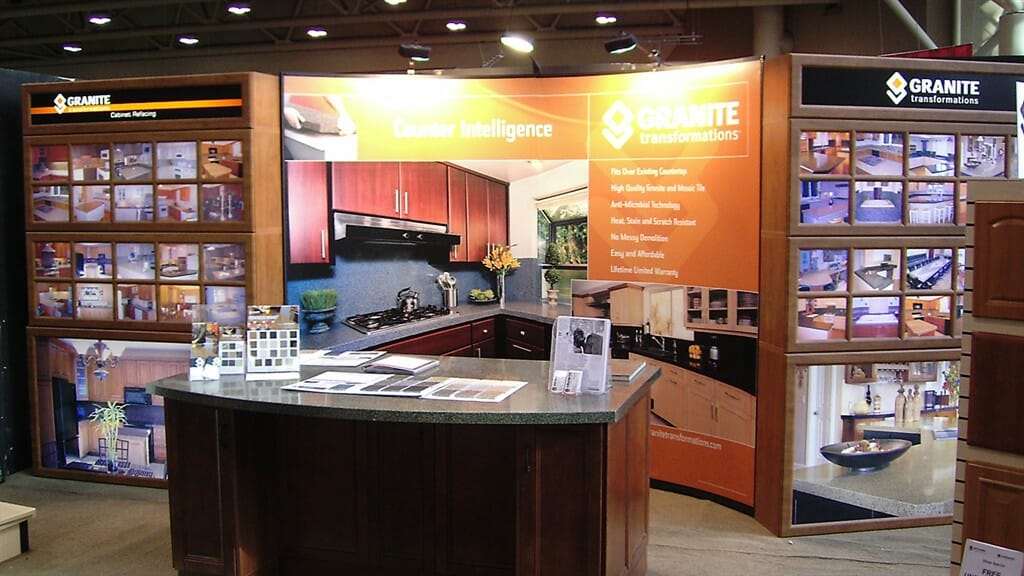